Gordon's Navy Service Certificate dated 31 Dec 1947. It shows Gordon to be of good character with no discipline issues. By May 1949 he had progressed to Able Seaman
Gordon’s National Service. This was introduced in the post war period In an effort to maintain Britain’s Great Power status and provide a reserve of troops who could be called up in any future major conflict. They were to be available for immediate deployment, notably in the decolonisation wars in Malaya, Kenya and Cyprus. Most young men aged over 18 were required to serve at least 18 months in one of the armed services followed by four years on the reserve list. In total over 2,301.000 young men were called up. 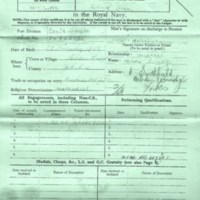